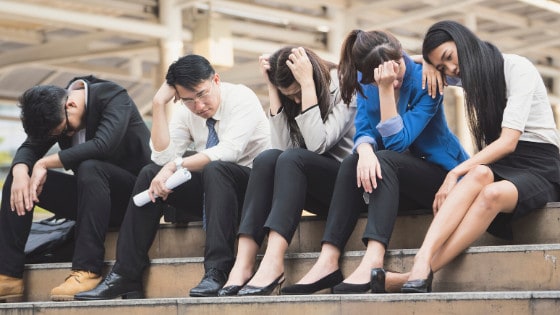 College graduates being unemployed and underemployed is becoming a problem, especially in the U.S.A. Over 50% of new graduates are getting jobs that do not require a diploma of that caliber. Some are even there for the next 5 years. Even race plays a part in this: African Americans are more likely to face unemployment vs. Caucasians. The recent COVID-19 pandemic has pushed the whole world into unprecedented circumstances, around the world with a forced slow down in economies and mass unemployment. The graduating class of 2020 is entering into the most unstable global market since the great depression.

How Many College Graduates Are Unemployed?

As of January 2020, the college graduate unemployment rate with a bachelor’s degree or higher in the United States is 2%. According to the University of Washington, the underemployment rate of this same demographic for their first job is 53%. This means they are either: underpaid or overqualified for the job that they got ex. working in the fast-food industry.

The same demographic in 2019 had a 2.4% unemployment rate, a significantly larger number. A global estimate conducted in 2017 on the number of underemployed graduates consisting of America, Australia, Canada, China, and the UK, the final number was 27.46%.

Percentage of Unemployed Graduates Per Year

According to the U.S. Bureau of Labour Statistics, the percentages are as following:

As you can see, the number varies throughout the years. This depends on many factors like the student’s major and field of work, the economy, and the demand for specific types of work. It is a supply and demand system.

Just looking at the unemployment rate:

Now the wage difference. The median pay for these two demographics is 58.47%. Meaning that if a person with a bachelor’s degree is earning $1281/week the person with a high school diploma earns about $749/week.

As of January 2020, the unemployment rate is 2.1% of students with a bachelor’s degree, and about 53% of the students are underemployed. As COVID-19 affects more people and businesses, job opportunities will also be greatly affected. This varies from university to university, or if you have an associate’s degree, and it also depends on the level of education obtained.

This is higher than the average unemployment rate, but it is still lower than a demographic with a bachelor’s degree and above.

(For all purposes this is men and women there were no studies that included non- binary.)

As you can see here, the difference between men and women is not significant.

As you can see here, the difference between the races is a lot more significant, the biggest difference being 0.8%.

These stats are from the U.S. Bureau of Labour Statistics:

The changes here are understandable as the average level of education increases with age. Aforementioned, those with higher education tend to have a lower unemployment rate.

Statistics on College Graduates Getting Jobs

On average, it takes a college student around 6 months to get their first job. Previously, it has taken college graduates less time to get jobs, but now that has increased. As this COVID-19 causes evermore disruptions in industries, jobs are not being created. In 2008 the economy experienced a recession, and college graduates’ unemployment rate spiked, creating a situation similar to what is happening now.

A study conducted by Business Insider with respect to the unemployment rate by college major revealed that these are the worst job prospects a major can get you:

The reason behind this is because there is little competition in this field of work. Mainly because most of the students are religious and wish to pursue that path.

Public policy focuses on coursework in politics, economics, and sociology to solve different policy issues. Potential career paths include government relations, legal services, nonprofit management, and community development. Despite such a low unemployment rate, these graduates have one of the highest underemployment rates.

1. The average 2018 college graduate with a bachelor’s degree and higher employment rate is 76.5%.

Statistics on College Graduates Vs Non-Graduates

Although, currently they may have a higher employment rate than the university demographic. These graduates are needed because most people think that university is the only way to go, but people who can do hands-on tasks.

Projections for the Future

As you may or may not know, COVID-19 has affected the job market because of quarantine has caused shutdowns across the globe.

The US is being hit especially hard because it is fueled mainly by consumerism and because everything hit the brakes, relatively little money is coming into the US.

The demographic without any college or trade experience is probably going to take the majority of the hit.

The economy will experience a sharp decrease in the second quarter of 2020 stemming from factors related to the pandemic. Although, in the third quarter economic activity is expected to increase, as concerns about the pandemic decrease, state and local governments ease up, on bans on public gatherings, and other measures restraining economic activity.

Though the economy might recover a little, the effects of this pandemic are going to linger for a while longer.

As the new crop of high school graduates looks into the prospects of college education, all these factors are at the forefront of their minds. The rising college graduate’s unemployment rate and the skyrocketing fees of a college education make it serious consideration, as an investor considering the dividends on their investments. In an increasingly global economic environment, many traditional unskilled jobs are being moved overseas where wages are much lower and a workforce readily available for a fraction of the cost compared to North America. China, Brazil, Indonesia, Taiwan, India, Mexico, etc. are increasingly attractive destinations to take over the production of goods. These countries are also increasingly putting out highly educated graduates coming to the West for better-paying jobs, higher levels of education, and higher standards of living. These conditions create increased competition for the in-demand streams of college education and the prospects in the job market thereafter.

All things considered, at this point, a college-level education is still the best way to a successful career, and a way to move up the socio-economic ladder. The challenges notwithstanding, a college degree is still a very attractive proposition.

What percentage of college students get a job after they graduate?

What percentage of the workforce has a college degree?

What race has the highest college graduation rate?

According to the US Bureau of Labour Statistics, the demographic with the highest graduation rate was Asian Americans. Over 60% of them had educational attainment of a bachelor’s degree and above.

What is the meaning of graduate unemployment?

The meaning of graduate unemployment is the number of graduates in a specific demographic that is not employed. Sometimes we subdivide the demographic into multiple different ones like age, or race, things like that.

What does underemployment mean?

Underemployment means that a person is overqualified for a job that they are doing. For example a person with a bachelor’s degree working in a fast-food restaurant.

What is the average pay of college graduates?

What percentage of the earning of all workers do college graduates account for?